Stock options market trading is featured in this article as the basis for a personal money management business.

Frank A. works out of his home as a self-directed, private stock options market trader.  He is not a day trader (one who trades many times during a day), nor is he an investor (a long term “buy and hold” person who, typically, is unclear about his exit strategy). He is, rather, a “swing” or short-term options trader.  He trades only out of his own personal account.

After a 7 year stint of daily study, practice and learning “the hard way,” he finally began consistent, positive returns. He explains that while options market trading appeals to many people because of the leverage, with most people it is much more challenging than it at first appears.  But he is surviving the tough learning curve of any entrepreneur.

ANY business, whether it’s trading, operating a shoe store or a restaurant, has a learning curve and is replete with decisions that must be made.  ANY successful business takes three very different personalities – a technician, a manager and a marketer whom must work in balance and synergy. (We must HIRE them or BE them!)

While large numbers of people go into business for themselves every day, sadly the failure rate of these businesses is very high. After the initial dream of being financially independent and “free from a boss,” new entrepreneurs soon learn that it’s not an easy task. (Being “self-employed” is similar, to many ways, in being “UN-employed!”

Sitting at home alone, in front of the stock market screen and becoming a successful trader requires the same planning, preparation and self-discipline as any other type of business.

What is Frank actually doing in options market trading?

He trades options, which are called “derivatives” and are actual contracts to buy and sell stock.   They are of two types – calls and puts.  People are attracted to them because through them, you can control a large number of shares of stock for a relatively small (although riskier) investment than buying or selling the stock outright.

On a typical weekday he monitors and trades the stock market for about the first and last 90 minutes of the trading day. (He is yet a part-time trader, working another business as well.)  During this time Frank observes the three market conditions of price movement, passage of time and volatility movement.  Unlike most investors and even other traders, price is NOT his focus, but rather volatility.  He makes the most money when volatility is HIGH and, in fact, considers himself to be primarily a volatility trader.

Frank shocks people when he teaches that “The nearest thing to options trading is poker!”  He points out that while professional poker players have no idea what cards are coming up next, THEY KNOW THE STATISTICAL PROBABILITIES of each card and they play those probabilities into long term, consistent wins.  Thus he, like being the HOUSE in Vegas, is a statistical analysis trader that uses the laws of probabilities to make a CONSISTENT income.

How does he decide what stocks to trade?

His techniques are based on the philosophy that the movement of stock price is a “random walk”, that the market is not predictable. He says that he pays NO attention to financial analysis, technical analysis, news releases, or any other information about a company. (He advises, “NEVER listen to news or financial forecasts from anyone!”)

The 3 market conditions that all traders deal with are he deals with stock price movement, passage of time and volatility movement.

Frank’s options market trading is non-directional.  To a trader (not an investor) it makes no difference, whatsoever, whether the price is going to go up or down.  He can play “both sides of the fence” equally well. (Also, though it confuses people, he can either buy first and sell later or sell first and buy later!) As a statistical trader, he trades a price range instead of a price direction.  His techniques include the contrarian approach of selling when the price is going up and buying when it goes down. (This seems backwards, doesn’t it? But one gets the best BUYING prices when everyone wants to SELL and the best SELLING prices when everyone wants to BUY!) 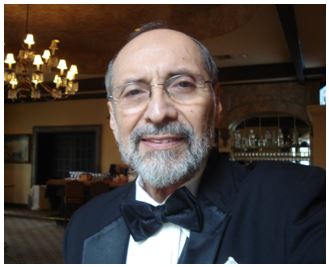 Frank explains that across the world, there are huge numbers of people that trade.  They are referred to, collectively, as the trading ‘herd.’  As such, there is a herd mentality. This is why he’s adopted the contrarian perspective as mentioned above.

Professional trading, however, depends on personal self-control and discipline, not on what the herd mentality is saying.  It does NOT require, contrary to popular perspective, in-depth knowledge of economics or finance!  He feels that anybody can learn to trade if and only if they trade very small, doing a huge number of trades over a long time.

The vast majority of new trading students fail, all for exactly the same reasons: They get in a HURRY and want to make BIG MONEY QUICKLY.

For Frank, it’s a slow growth learning process.  He asks, at trading classes and speeches that he gives, “What’s the #1 reason that so many trading students fail?”  Students are always shocked when they hear the answer: “They try to make money!”  (This gets their attention.  Then he explains that they must FIRST learn HOW to trade.  Only then should they SLOWLY start to increase their trade size.)

Where did he learn his options market trading methods?

He traveled to many cities across the country to attend training courses in person.  He took three months out of his other business and away from his family to work and study at a brokerage house in Chicago.  He then worked as a consultant to three major trading education companies in the development of their options trading classes. He currently writes a weekly column for a trading education company out of Florida and is active in a local trading group, a cyber-trading group and in live groups in Manhattan where he speaks on trading.

Additionally, he has several trading mentors who are professional, highly successful traders.

Frank uses the online trading brokerage for whom he worked, thinkorswim out of Chicago, which is now part of T. D. Ameritrade.

How is his business set up?

Frank is incorporated and owns a DBA (doing business as) under which he does his stock market options trading.

What is Frank’s background?

He has a master degree in psychology and bachelor’s degree in biology, but no academic education in business of any kind.  He is a serial entrepreneur and has set up and operated other businesses.  He is NOT taking money out of his trading account for living expenses, but, instead has an income from a septic system designing business.  This is his 39th year in that endeavor and he speaks and writes both state-wide and nationally in that industry, as well.  He is a Registered Sanitarian, a person who has expertise in public health, whose focuses are water and wastewater.

While he was hesitant to jump into the stock market industry because of feelings of inadequacy in the area of finance, he soon realized that anyone can learn the techniques of trading.  It’s the psychological and mental game of self-disciple, commitment and determination that really makes the difference.

Why was Frank motivated to become a self-directed money manager?

He learned that over the course of a lifetime, the average investor will pay up to 40% of their entire “nest egg” in management fees if they simply rely on a financial manager.  He felt he could do better on his own and made the entrepreneurial move to control his own money.

Where does Frank expect to be with his options market trading business in 5 years?

Frank will eventually begin to take out a monthly stipend upon which to subsist.  He and his wife will continue to live, part-time, in Manhattan and other places around the world and write, speak and teach personal trading.

The lesson we hope to learn from Frank is that one should never fear getting out of one’s comfort zone.  Anything can be learned, including stock market options trading.  It’s more about personal determination and self-confidence than technical expertise and knowledge.